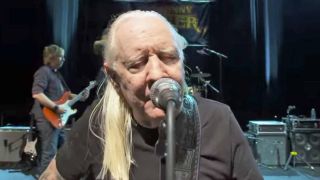 A bonus scene from the Johnny Winter documentary Down & Dirty is being exclusively premiered with TeamRock.

The clip shows the late bluesman and his band sound checking before a gig in France. Down & Dirty was released earlier this year by Greg Olliver, known for his work on the acclaimed Lemmy documentary.

Also in the clip, Winter discusses why he was still playing live into his late 60s. He says: “As long as I’m healthy enough to play good, I’ll keep doing it. I’d like to do it another 20 years if I could.”