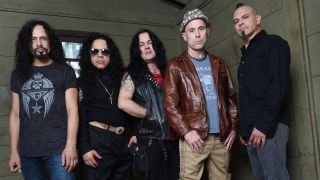 Former Anthrax singer John Bush wants to hear the band’s current lineup play some of the songs from his era.

And he’s explained why he decided to take the job vacated by Joey Belladonna in 1992, after he’d refused to accept a role with Metallica several years earlier.

James Hetfield and co asked him to become their frontman in the early 80s, but he wanted to focus on his own outfit, Armored Saint – and remains convinced it was the right move.

Bush tells The Metal Voice of his Anthrax move: “I didn’t like the idea that I was leaving the band, abandoning the band – but I just had to.

“We’d just made Symbol of Salvation. That was a great album. The results were kind of similar to what we’d accomplished before. It was time for me to move on.”

When he joined the thrash icons he insisted on one thing: “It was important for me to be part of the songwriting process,” he says. “I didn’t want to go and be told what to do – I heard that’s kind of how they’d worked with Joey.”

Bush was sidelined in 2005 when Anthrax reunited with Belladonna for an anniversary tour. When that collapsed, and relationships disintegrated with next frontman Dan Nelson, he returned for a time before Belladonna took the job back in 2010.

He’s previously discussed his disappointment over the loss of communication with his former colleagues. Now he says of the anniversary split: “I think it could have been handled a bit better. The manager created a kind of wedge. If those guys said, ‘We’re considering a reunion tour – it’s the right time,’ I would have said, ‘I understand.’

“The rumours were already circulating, people were asking questions and those guys were trying to deny it. We were doing interviews together and I knew.”

But he adds: “It’s water under the bridge. I would entertain Armored Saint opening for Anthrax. I do love the music I created in Anthrax – I’d actually prefer them to play a couple of songs.”

Armored Saint just release seventh album Win Hands Down and they’re gearing up for a European tour. Anthrax are expected to launch their 11th record later this year and tour the UK with Slayer in November.