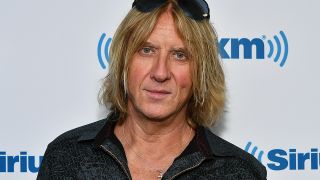 The next episode of the US broadcast of Brian Johnson’s Life On The Road will see the AC/DC frontman chatting to Def Leppard vocalist Joe Elliott.

The show will be screened on AXS TV this Sunday (October 6) at 9pm EST and will see Elliott reflecting on the band's Pyromania and Hysteria tours, as well as the tragedies the band suffered along the way and more.

In a new clip from this weekend’s broadcast, which originally aired in the UK in 2017, Elliott says he has “no problem” with playing the band’s hits live onstage.

He adds: “When I go and see the Rolling Stones or Paul McCartney, I'm not really bothered about hearing Flowers In The Dirt – I want to hear Eleanor Rigby.

“If you didn’t play anything off Back In Black there would be a riot. If we don’t play things off Hysteria, we are pleasing the 1% that criticise it.

“I’ve always said, if you can’t handle the responsibility of writing a hit, don’t write it.”

The following Sunday’s episode will see Johnson travel to San Rafael, California, to meet Metallica drummer Lars Ulrich, who shares stories from his band’s Wherever We May Roam tour and more.