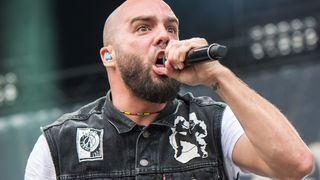 Killswitch Engage frontman Jesse Leach has slammed people who are making negative comments about Chester Bennington and his music following the death of the Linkin Park vocalist.

Emergency services arrived at Bennington’s home in Los Angeles on Thursday morning, with reports indicating the vocalist had died by suicide.

His death has stunned the rock and metal community, with many fans expressing their grief on social media. But some have used the opportunity to knock Bennington and his music – and Leach says he’s disgusted with some of the online comments.

He says on Instagram: “Appalled by the lack of sympathy or respect by some for a human – who happens to be a musician – who died tragically.

“The fact that anyone would have the audacity to critique or comment on his music on the day we learn of his passing is beyond me.

“We get it, you’re very cool, you didn’t like what you saw as ‘unhip music.’ What a desensitised, disgusting and selfish way to present yourself. Take your opinion and shove it up your pretentious ass.

“A fellow musician committed suicide today and all I can think of is his family and friends.”

Leach adds: “Mental illness is rampant in the artistic community. We should be addressing this tragedy with respect, compassion and grief. Keep your unwarranted options to yourself and allow his friends and family to grieve.

“Just because he was in the public eye gives you no right to judge his life or music at this time. Show some class please.”

Hale says via her Instagram account: “We lost another voice of a generation today. I’d like to remind everyone that follows me that you are never alone. Life is fucking hard and every single one of us has beasts inside of us that we battle daily.

“And as humans… do your part. Stop with the cyber bullying and hating people for stupid reasons. How about instead leave uplifting messages of hope and love and rock’n’roll. Just one word of kindness can change someone’s life. I’ve seen it in my line of work.

“You are powerful enough to help someone or hurt someone, so choose to spread positivity.”

Hale adds: “Chester, you will be missed, and I’m sorry that you felt like you had to leave this way. But all of the people that you’ve healed through your music, we thank you for your time here and your music will live on through us.”

An investigation into Bennington’s death is being carried out by the Los Angeles County Department Medical Examiner’s office.

The downward spiral: Why is depression on the rise in metal bands?