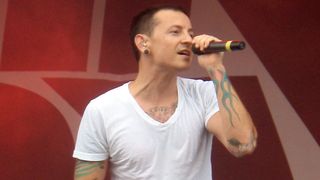 Tributes have been pouring in for late Linkin Park and former Stone Temple Pilots frontman Chester Bennington, who has died at the age of 41.

Emergency services arrived at Bennington’s home in Los Angeles on Thursday morning in regard to a cardiac arrest call, with reports indicating the vocalist had died of suicide by hanging.

Bennington’s death has left the music world stunned and comes just months after the passing of Soundgarden frontman Chris Cornell, who would have celebrated his 53rd birthday on July 20.

Linkin Park posted a poignant image of Bennington at one of their live shows, surrounded by hundreds of fans on Twitter.

The band are signed to Warner Bros, with their CEO and chairman Cameron Stang releasing a statement which reads: “Chester Bennington was an artist of extraordinary talent and charisma and a human being with a huge heart and a caring soul.

“Our thoughts and prayers are with his beautiful family, his band-mates and his many friends.”

Paul Stanley from Kiss said via Twitter: “RIP Chester Bennington. We can never know someone’s pain. Prayers to his family in this tragedy. If you need help, reach out.”

Former Motley Crue bassist Nikki Sixx added: “I am in tears. Chester just told me how happy he was. He was such a sweet and talented man. I feel so sad for his family, band mates and fans.”

During Stone Sour’s show in Mansfield, Massachusetts, last night, an emotional Corey Taylor dedicated the track Through Glass to Bennington.

Taylor said: “This was one of his favourite songs. I want to dedicate it to him. Chester, we will fucking miss you.”

See their tributes to the vocalist below.

Chester Bennington: The Voice Of A Generation