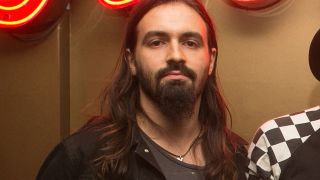 Jay Weinberg is known to millions of metal fans around the world as the drummer in Slipknot – but did you know he was a massive ice hockey fan?

Jay not only loves the sport, but he also plays – and in a new interview with former NHL star and self-proclaimed metalhead Mike McKenna on his 6 Degrees podcast, the drummer talks about the mask he had specially designed for when he's out on the ice.

Asked what his Slipknot bandmates thought about his goalie mask, Jay replies: “I don’t even know if anybody in the band has even seen that! After we finished touring in support of our last record, I had some time at home to regroup. Living in Nashville, a lot of people got hockey fever after the Predators made their Stanley Cup run.

“I have a friend who runs a guitar shop in town and he and I said: ‘We’ve got to start a team,” so we started a team together called the East Side Hellhounds. He and I were on the ice at 6am every day, playing hockey and getting our chops back because I had quit playing hockey.

“But I got my pads and basically had the mindset of, ‘All right, I play in a band where I wear a mask – I can’t not have my goalie mask be my Slipknot mask.’ So I contacted a really talented guy named Dave Fried from Friedesigns, who painted my goalie mask.”

Speaking about his We Are Not Your Kind stage mask, Jay says it’s a “subtle evolution” from the previous one he wore for the tour in support of 2014’s .5: the Gray Chapter.

He adds: “It was interesting to me that over the course of that tour, my mask became more my mask in totally natural ways. I’ve only had the one mask and it just fell apart, but it fell apart in a cool looking way – it kind of took on it’s own character.

“As we were making this new record and feeling how the new songs were making us feel over the course of three years, that all factored in to the approach of how I was going to make my new mask – tearing away certain elements, making it almost seem like you submerged that old mask in bleach and it went through kind of a cleansing ritual.

“I was a big fan of how the band, from record to record – almost like season-to-season when you see a goaltender switch up a mask or a pad setup – even within a record cycle, the guys in Slipknot would evolve their masks.

"It was my second album with the band, so I didn’t want to keep the mask the same. It’s got to change as we all change as people. So it reflected the way the album was taking shape, the way the songs were sounding.”

Jay also reflects on the thrill of playing onstage with the band he loved as a youngster.

He says: “Records are great, music videos are great, but everything about Slipknot is on stage. It’s nothing without the live show. So making a record and then playing several hundred shows, that taught me what Slipknot really is, and that’s not an education I could have had as a fan.

“I could have attended every Slipknot show ever and not understood what it was like to be on stage. And as soon as we started the first show, I was like, ‘Oh! I get it!”

Earlier this week, Slipknot released their new video for Nero Forte and announced a further two shows in Germany next summer, which will follow the band’s UK and European tour.