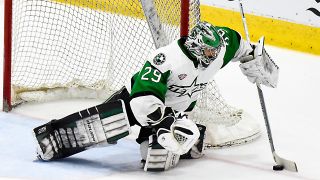 As another summer festival season recedes in the rearview mirror, sport-minded metalheads across the planet are turning their attentions to the EPL, NFL and that frozen tundra of icy brutality, the NHL.

We’ve already made the case that ice hockey is the most metal sport on the planet and it’s hardly surprising that the sport is teeming with headbangers New York Islanders goalie Robin Lehner loves In Flames so passionately that he designs his masks with imagery inspired by their music. When Disturbed play in Dallas, you’re sure to find Stars defenceman Marc Methot somewhere near the front, while up in Boston, Finnish goalie Tuuka Rask packs his Spotify playlists with chest-pounding bangers from Children Of Bodom, Amorphis and HIM.

One is hard-pressed however, to find a more committed and knowledgeable metalhead than Ottawa Senators goalie Mike McKenna. A battle-worn veteran over 500 professional hockey games, Mike has played for fourteen teams in both the NHL and the AHL — the league one rung beneath the NHL. The Ottawa Senators signed him this summer as their third-string goalie, which will see him backstopping Ottawa’s AHL affiliate, the Belleville Senators, stepping up to the NHL as necessary during the season.

When he’s not fending off 100 mph slapshots, Mike listens to unbelievable amounts of metal — a passion that unfolded while he was still in grade school.

“In fourth or fifth grade I heard Nirvana and that blew my mind wide open,” he tells Metal Hammer. “From there it progressed to heavier and heavier music. By sixth or seventh grade, I was listening to Deftones and Korn and that whole nu metal movement. That was all I knew at the time, but I eventually discovered Fear Factory, which was the first time I’d heard double bass and really fast picking.”

There was no turning back. In college, while his classmates were plastering dorm room walls with glossy Nickelback and Train posters, Mike dove full throttle into Bay Area thrash, old school black metal, melodic death and whatever other extreme music would fit on his iPod. A veteran of nine consecutive Ozzfest tours, he vividly remembers that watershed moment for so many metalheads — the first time he saw Slayer.

“I remember Ozzfest ‘99, being sixteen years old and my buddy and I were looking at each other with big wide eyes when Slayer came out. We didn’t know what to expect! We’d never seen old school metal guys and a serious pit before. We thought there were going to be stabbings! Ha ha We just had no idea, man!”

These days he spreads his love across most genres, “I’m pretty diverse,” he says. “A lot of the stuff I like is either thrashy or black metal-influenced — not the really fuzzy, lo-fi Darkthroney black metal, but more modern stuff like the new Behemoth. The only kind of metal that I’m not super into is the straight-up old school Florida death metal. It doesn’t hold my attention the same way as the thrash, black and the really fast stuff do.”

And then there’s that other thing that’s been happening in metal lately... “What’s really bothering me is these bands with saxophones,” he says with palpable disdain. “There’s this trend to put saxophone in everything. Like Rivers of Nihil on their last album. [2015’s] Monarchy was my favourite album of that year by a mile, but this new one, I just can’t get into it. Even Satyricon had some sax – it was just a little bit though, so I could handle it. Akercocke had it, Ihsahn from Emperor... suddenly everybody’s using a saxophone. Knock it off, guys! This needs to end.”

As training camp begins and those first pre-season games approach, we asked Mike to give us his top five tunes to get the blood pumping before taking the ice.

"I put a lot of thought into this. I have a playlist of thirty or forty songs that I put on before a game, so narrowing those down to five was brutal, but the first one that came to mind was Twilight Of The Thunder God. It’s just one of the best songs ever written. Those guys are super cool, too. I met them a couple of years ago when they were playing in Worcester. I’ve become social media friends with Johan Hegg. His wife is a yoga instructor for goalies, and as a goalie myself, that’s really cool. And he’s just a great guy. That song is unreal."

"It’s just a kickass, non-stop, aggressive, in-your-face song. And those riffs! I’ve adopted that song title as my personal motto. It’s not tattooed on me or anything, and I have no idea what Phil’s intentions were when he wrote that, but to me it means that your mental strength can be stronger than your physical strength and that it can carry you. As a goalie, developing the mental strength to power through adversity is key and this is just a killer song that never lets up."

Anaal Nathrakh – Forging Towards The Sunset

"I think they’re honestly the heaviest band on Earth. Intensely heavy. But their production is still so clean. There are bands that are super heavy but it’s just a wall of noise. With Anaal Nathrakh, it’s incredibly heavy but you can still appreciate all of the instruments; their music is really well-produced. It’s starts super heavy, then it gets heavier and then all of a sudden, there’s this soaring clean vocal section that kicks in. It’s awesome, man."

"I don’t think I need to say much about that song. It starts and never stops. When I first heard The Satanist, I thought, 'This track’s going to be a live song, for sure.' Then when I saw them last summer, sure enough, it was the second-to-last song they played because it absolutely rips."

"I know that’s from their black 'n' roll era, when they really started doing it, and it’s not the traditional lo-fi, fuzzy black metal. But to me, it just rocks. It’s such a killer riff, it just gets me amped up. I saw Satyricon live on their last tour – they said it was their North American farewell tour – and it was one of the best concerts I’ve ever seen. They played for two hours straight. I saw their show in Austin and it was just amazing. An unbelievable live band."

"So that’s my list. I hope it gives me some street cred. Ha ha!"

Mike, you had us at Slayer.