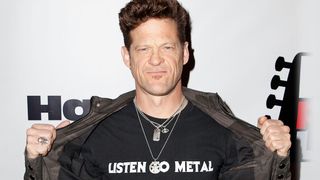 Jason Newsted says one of the reasons he’s pursuing his acoustic project is because he achieved everything he could in heavy music while he was with Metallica.

He’s happy for bands like Slipknot to take up the mantle – and admits he can’t play “heavier and faster” the way he used to.

He last week unveiled Would And Steal, a duo featuring Rob Tucker, which focuses on classic Americana.

Newsted says in a video: “After 30 years of playing heavy music, I’ve been around the globe about five times. I’ve already climbed that mountain.

“We got Grammy awards, the Hall Of Fame and all those different things. That’s as far as you can go in that kind of music. It’s someone else’s turn to have fun in that music now.”

He adds: “I can’t play like Slipknot now. Those guys are heavier and faster than I could ever dream of playing now. This is how I can play, and this is what I’ll do for the rest of time.”

Newsted – who’s also worked with Ozzy Osbourne, Voivod, Flotsam And Jetsam, Echobrain and the recent self-titled solo project he shut down in 2014 – says he still plays metal “all the time.”

He adds: “This project happens to be the thing that I want to share with everybody. There’s not a big deal about making money, or competing with anybody else.

“Whatever happens in our studio now is what we’re trying to share with anybody that gives a crap.

“If they want to share it, that’s cool. If they don’t, and they only like metal, then peace and more power to you.

Reflecting on his chosen genre of music, he says: “As I play this, I find myself being able to expose myself to more people. I’d say age four to 94 can listen to this music and enjoy it.