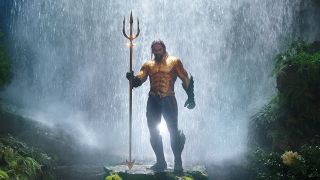 Jason Momoa has revealed to Metal Hammer that his portrayal of Aquaman was inspired by Tool and their song Ticks And Leeches.

Speaking to Metal Hammer about the character of Arthur Curry/Aquaman, Jason Momoa says be often uses metal songs as inspiration for his roles, citing the Los Angeles progressive metallers as the driving force behind his new superhero persona.

"Aquaman's pretty metal. I know no-one thinks that, but Aquaman's metal," Jason tells Metal Hammer. "I kind of build my characters off of metal songs. Conan (The Barbarian) was really heavy Pantera, I'd say Aquaman was probably mostly built out of Tool and (Metallica album) Kill 'Em All. Ticks And Leeches, if I want to get specific. There's a lot of Sabbath in there too."

Stay tuned for a full video interview with Jason Momoa on Metal Hammer.