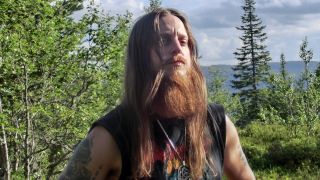 Darkthrone’s Fenriz has been involuntarily been elected into his town council in Kolbotn, Norway.

The black metal mastermind was asked to be on a list of backup representatives for the country’s Liberal party. When he was chosen to run, he put up posters featuring photographs of him holding his cat, along with the caption ‘Please Don’t Vote For Me’ – but his campaign backfired.

He tells Clryvnt: “I’m in the local papers because I got voted in as a politician – involuntarily, I might add. So, I’ve got some support, I guess. But Kolbotn is a tiny place, maybe 9,000 people.

“Norway is very small, so when you’re a local politician, you’re local, man. I’m a pillar of my community!”

When asked whether he could decline the role, he replies: “No, if you get voted in, you have to stay in that position for four years. And then you can pull out. But I’m used to these sort of long-term commitments.

“Basically, they called and asked if I wanted to be on the list of backup representatives. I said yeah, thinking I would be, like, 18th on the list and I wouldn’t really have to do anything.

“They just need a list to be able to – well, it’s hard to talk local politics in another language. My campaign was a picture of me holding my cat saying, ‘Please don’t vote for me.’ But people just went nuts.

“After the election, the boss called me and told me I was a representative. I wasn’t too pleased, and I’m not too pleased about it. It’s boring. There’s not a lot of money in that, either, I can tell you.”