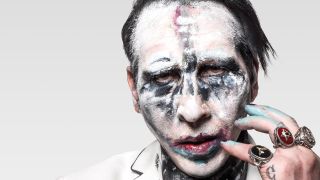 Marilyn Manson has posted a cryptic message on Instagram that could be a teaser for his upcoming new album.

Under an image of what appears to be a neon-coloured ECG scan of a heartbeat, Manson writes: “Omnes surdus es et nunc audite me…”. According to Google, the Latin phrase translates as “All Deaf, And Now You Hear Me”.

Whether the post is teasing a brand new album or even an Antichrist Superstar tour or reissue isn’t clear.

However, the singer has been working on the follow-up to 2017’s Heaven Upside Down with country-rock star Shooter Jennings.

Asked by Revolver in 2019 if he had a name for the record yet, Manson responded: “It's still to be determined, but I think it’s the album that should be called Marilyn Manson."

He explained: “I’m in a mode in life where I wanted to tell stories with this record, and it's sort of like a wax museum of my thoughts, a study of the chamber of horrors in my head. All the romance and hope you can have in the world, here in the End Times where it can be a different kind of apocalypse for each person listening to the record.