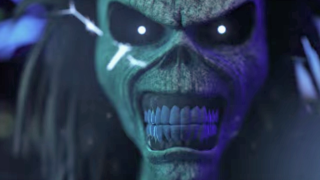 The metal giants this morning issued a video for their track Speed Of Light – which appears on upcoming album The Book Of Souls, due out on September 4.

The video features Maiden mascot Eddie making his way through a series of video game-style events.

He added: “Every time you make a record it’s the best you’ve ever made. This one, without a doubt, is the best record we’ve ever made. Sonically it’s brilliant. The compositions of the songs are fantastic.”

The album release was delayed to allow frontman Bruce Dickinson to fully recover from treatment for cancer.

The Book Of Souls will be available in 2CD, 2CD deluxe, triple heavyweight vinyl and various digital formats.