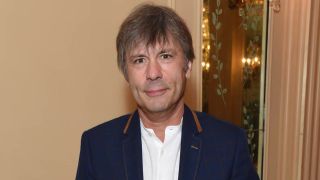 Iron Maiden singer Bruce Dickinson has given more details of his cancer battle and reveals doctors removed two tumours from his neck.

In February, the frontman originally revealed his diagnosis indicated a single growth on his tongue, which led to a 7-week course of chemotherapy and radiology.

Now, the singer says doctors had to deal with removing two tumours during his treatment.

Dickinson tells the BBC: “I had two – one was three and a half centimetres, the size of a golf ball – and the other one was two and a half centimetres and getting a bit bigger. The only symptom was that I had a lump in my neck, and that was the second one. So I went to the doctor and they took a scan of it, had a look, took a poke around and went, ‘You have neck cancer.’

“I’ve just been through what a ton of people actually go through every day. There’s thousands of people in the UK and around the world who have treatment for this kind of thing, so, in that respect, the only thing that’s special about it is that I’m quite a well-known person.”

He adds: “I’ve been very fortunate and had a really good bounce back and everyone says it’s gone so I’m just getting better now, healing up.”

Dickinson was given the all-clear from cancer in May and, although he’s keen to return to singing, he isn’t in a hurry to push his voice too early during the recovery period.

He says: “I’ve only come out of treatment two months ago and the doctor said it will take a year to get better. We’ve beaten that by about six months, so far, but I’m not going to try and push things to prove a point. We’ve got loads of time.”

Iron Maiden will release their first-ever double studio album, The Book Of Souls, on September 4. Recorded in 2014, the project was put on hold following Dickinson’s diagnosis last Christmas.

On Friday, Iron Maiden were presented with the 2015 O2 Silver Clef Award by UK charity Nordoff Robbins at their 40th anniversary gala, in recognition of the band’s “outstanding contribution to UK music.”

The honour also recognises the group as one of the most globally successful and influential rock bands of all time, with more than 90 million albums sold worldwide.