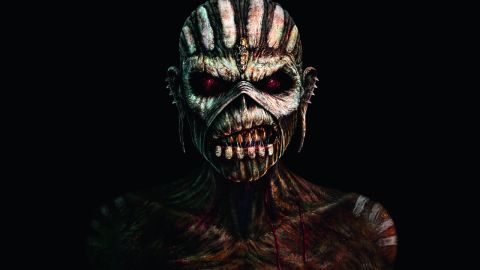 “There’s a hell of a lot to take in,” Steve Harris recently and sagely proclaimed of Iron Maiden’s first studio double album. Although it’s rare for double platters to genuinely contain two CDs’ worth of material, at 92 minutes The Book Of Souls is a gargantuan emotional journey through some career-best performances that more than makes up for a five-year wait.

“There’s a hell of a lot to take in,” Steve Harris recently and sagely proclaimed of Iron Maiden’s first studio double album. Although it’s rare for double platters to genuinely contain two CDs’ worth of material, at 92 minutes The Book Of Souls is a gargantuan emotional journey through some career-best performances that more than makes up for a five-year wait.

In the contemporary orthodoxy of one-off downloads and impatient flicks through stream-sites on smartphones, Britain’s biggest metal band proudly push against the grain, reminding us of a time when The Album was an immersive spiritual experience explored in darkness through headphones. That’s not to say it’s some ponderous prog odyssey; it’s still suffused with the fire and thrust of musicians who learnt their craft in sweaty 70s boozers, but it repeatedly demands and rewards your full attention, different songs and segments blossoming with every spin. Bruce Dickinson, writing alone in Maiden for the first time since No Prayer For The Dying, tops and tails the album with its most thrillingly outré moments. Elemental curtain-raiser If Eternity Should Fail opens The Book Of Souls with a space-age blues vocal and mystical synth fanfare, culminating with demonic pronouncements over a dark acoustic coda, while elegiac 18-minute closer Empire Of The Clouds takes us aboard the 1930 R101 disaster, piano and violin augmenting the song’s poignant leitmotif, arrangements lurching and surging in sympathetic evocation of the doomed airship.

Throughout and between these magnificent Dickinsonian bookends, the band prove themselves on the form of their reunited lives. Nicko attacks his kit with customary barefoot joie de vivre, imbuing even the smallest tom-roll with his personality. Steve’s bass sound is warmer and more integrated, with some of the most sensitive, creative playing of his career. Despite the dirty looseness of the strummed bass intro/outro of his sole solo credit The Red And The Black, the song is distinguished by its jubilant procession of infectious guitar lines, and while some might baulk at the over-familiar ‘Whoa-oh’ chant that ‘Arry feels compelled to shove into his work, you’ll be whoa-ing along by the second spin.

The Man Of Sorrows shares much of the sumptuous, balladic melancholy of Bruce’s 1997 solo song of (nearly) the same name, but you might think the earlier song has the edge – until you get to the beautiful solo. Adrian Smith, Dave Murray and Janick Gers all distinguish themselves with joyous leadwork throughout the album, their distinctive approaches coalescing in a complementary union that packs an emotional punch. Emotional is a keyword for the whole album; there’s a reflective solemnity and depth, charged with wisdom and experience, even in catchy rockers When The River Runs Deep and Tears Of A Clown, rip-snorting NWOBHM a-sides Death Or Glory and Speed Of Light, and the atmospheric Mayan-themed doom of the title track. A couple of songs perhaps conform too readily to Maiden’s post-reunion archetype, but this is as bold as music gets and we’ll happily take years to fully assimilate this treasure chest of densely wrought heavy metal gold.