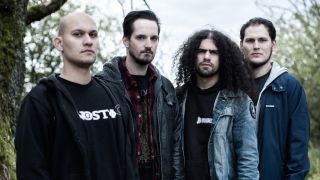 Epic, incendiary and utterly enthralling, Germany’s Der Weg Einer Freiheit are one of the very few bands who can resonate with fans of the current crop of post-black metal waifs as well as the black metal fans who hate that shit.

Despite having some superficial parallels with the likes of Deafheaven, there’s an elemental fury at the heart of their third album, Stellar, due out on March 23, that drives deep into black metal’s transformative heart, recalling the likes of Finland’s vastly overlooked TotalSelfHatred in its apocalyptic shudders, inconsolable refrains and fearless blast-driven charges towards the precipice, still steeped in the aroma of burning pine and lingering sulphur.

Thanks to the good and rustic peolpe of Season Of Mist, we are proud to offer a UK exclusive, full-flavoured taster in the soul-razing form of Requiem, an eight-minute-plus track that will storm through your soul, send the remants up into the godless skies and leave a glorious, dying sunset as a calling card. Give yourself over to Requiem below, you have nothing to lose except everything you once held dear!