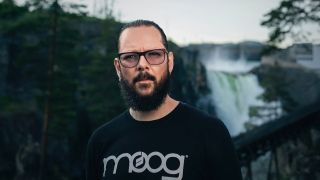 Ihsahn spreads his musical wings on new EP Pharos, which includes surprising covers of A-ha and Portishead. The EP will be released through Candlelight records on September 11. Ther new EP represents a more ethereal, progressive side to Ihsahn's music after Telemark, released in February, concentrated on his metal roots.

Leprous singer Einar Solbgerg, once a member of Ihsahn's backing band in his black metal days, guests on a cover of A-ha's Manhattan Skyline, said to be "a delicate but true-to-the-original version". Elsewhere Ihsahn turns his attention to a haunting version of Portishead's Roads.

“Telemark was everything that was close to my heart: basic guitar riffing, screaming vocals,” says Ihsahn. “I thought, ‘I need to do a sequel where I do the exact opposite’ - things that I don't know how to do, explore sonic territory that I haven't explored.”

Ihsahn has already released one track, the haunting Spectre At The Feast, which you can listen to below.