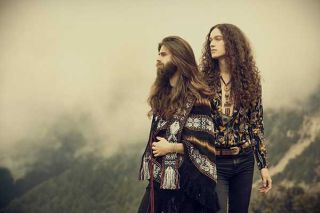 Canadian duo Crown Lands – one of Classic Rock's 20 bands to Shake up the 2020s – have released a video for their new single, Spit It Out.

The song? It's jerks along friskily like some kind of adolescent Led Zeppelin, with all the snap, pop and effervescent crackle of The White Stripes.

"Spit it Out deals with the frustrations of dealing with a partner who will not speak up when they have something to say," says vocalist/drummer Cody Bowes. "It addresses the anxiety of not being able to openly communicate.

"It is about carrying something within that you don’t have the strength or courage to say to someone, and instead of saying what’s on your mind you distance yourself from the situation."

Spit It Out was produced by the Dave Cobb, famous for his work with the likes of Rival Sons, Chris Stapleton and Brandi Carlile.

"Working with Dave Cobb was great!” says guitarist, bassist and keyboard player Kevin Comeau. "He prioritised capturing the spontaneity in our performances, and we feel that it is an accurate representation of who we are as artists."