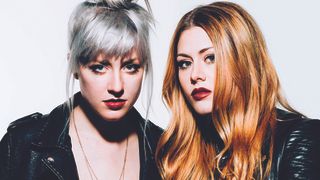 When bluegrass group The Lovell Sisters called time in 2009, as sister Jessica retired from music, Rebecca and Megan made a fresh start with a new name and a new direction. “We travelled with no drums, we were just a string band. That was a really fun part of our lives, but we had a secret love in our hearts for classic rock,” says lead vocalist Rebecca, who swapped her mandolin for a Fender Jazzmaster.

“And also we didn’t really write songs for The Lovell Sisters,” adds Megan, who switched from dobro to lap steel. “We knew we wanted to do our own songs, so with Larkin Poe, we switched from covers and traditional songs to doing almost all our own.”

From their acoustic origins, the sisters brought in blues, soul, country and 70s flavoured rock. “When I first started playing electric guitar, it was so loud, it almost frightened me because it was very different to have an amplifier with distortion pedals,” says Rebecca. “All it took was a little more deafness! It’s definitely a very different language that we’ve had to pick up.”

“Bluegrass provided us with a great foundation just because the level of musicianship is so high in bluegrass and acoustic music, especially in improvisation,” says Megan. “Because we started playing within the public eye from the age of 15, people have seen us grow up. You don’t know what you’re going to do at 15.”

“When we really had a shift from being very acoustic to being very electric, we had a lot of negative kickback from fans who were like, ‘What are you doing? You’re selling out!’” says Rebecca. “But really we’re just following whatever sounds we hear in our head at this point. And we will always do that. That’s why you fall in love with artists, to see how they change and grow.”

Larkin Poe have attracted famous fans and admirers – they’ve worked with T Bone Burnett on The New Basement Tapes project, toured with Elvis Costello and played on Steven Tyler’s upcoming country album. This summer they’ll release Reskinned, an updated version of 2014’s album Kin with five new tracks. “We felt that the record was already outdated based on how heavy we were getting in our live shows,” says Rebecca. “Just when you think you have it all figured out, that’s when music steps in and it can take your breath away,” says Rebecca. “There will be moments when you’re playing your song like, ‘Oh, these people, I don’t know if they like the songs’, ‘My shoes are too tight,’ ‘Oh my god, my hair looks horrible’, or whatever it is that you’re thinking and then she’ll play something, or I’ll stumble on something new that I haven’t played before and suddenly you’re back in the moment. Every show has the potential to be a complete, new experience.”

Reskinned is out on June 17 on RH Music.