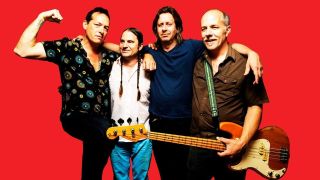 Hot Snakes have released a video for their latest single Checkmate exclusively with Louder.

The Californian outfit debuted the track last month, with the video arriving just as the band begin their UK and Ireland tour.

The video was directed by Hot Snakes guitarist John Reis, together with the band’s longtime friend John Oliver and shows digital representations of the group invade and infest a house.

Checkmate, which is available on digital streaming platforms, will also be available as a limited-edition 7-inch at the band's gigs this month. The disc will also include an exclusive track in the shape of Not In Time.