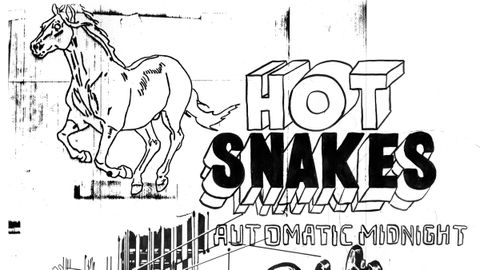 It always seems an odd decision to remaster albums when their charm lies in the raw, rough-and-ready nature of the music, and yet it’s something we see time and again when a record comes around for a second time.

Thankfully, both Sub Pop and Hot Snakes – formed by Rocket From The Crypt frontman John Reis and Rick Froberg after they’d been in the equally excellent Pitchfork and Drive Like Jehu together – know to leave things alone, and these reissues are presented in all their original spit-and-sawdust glory.

Debut Automatic Midnight (7⁄10) picks up the thread where their previous bands left off, a post-hardcore thrill-ride, Froberg’s incandescent yelp galloping to keep up with the speed-demon guitars, a breathless, unadulterated punk-rock rush with a heart of pure soul. Follow-up Suicide Invoice (8⁄10) takes its foot off the pedal a little, and in the process showcases Hot Snakes’ wonderfully snarky side (any album that starts with a song called I Hate The Kids is alright by us), but the beast was only collecting itself, and that old aggression rears its head again on the fiery, furious Audit In Progress (8⁄10).

Revisiting these records is a cathartic privilege. But the best news is that there’s a new album on the way in 2018. Bring it on.