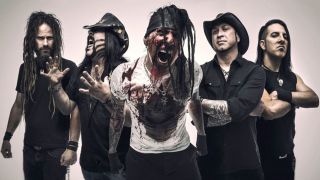 Hellyeah have announced that they’ll release a new album in 2019.

The band were reported to have been working on the follow-up to 2016’s Undeniable when drummer Vinnie Paul died on June 22 at the age of 54.

Yesterday, Hellyeah posted on Facebook: “Happy Thanksgiving, Hellions! See you all next year and with a new record that is going to blow you away!”

Bassist Kyle Sanders told SiriusXM (via Loudwire) shortly after Vinnie’s death that the drummer had finished recording his parts for the record, with those tracks now expected to feature on next year’s release.

Sanders added: “We're in the middle of huge things right now. This is the last thing you expect to hear. We're in the studio right now. We're doing a record. This is everything that Vinnie lives for. It's devastating.”

A public memorial service in honour of Vinnie Paul was held in July, with the drummer buried at a private service at the Moore Memorial Gardens cemetery in Arlington, Texas, next to his mother Carolyn and his brother "Dimebag" Darrell Abbott.