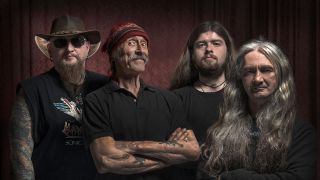 1. Quark, Strangeness And Charm
2. The Watcher
3. We Took The Wrong Step Years Ago
4. Flying Doctor
5. Psychic Power
6. Hymn To The Sun
7. The Age Of The Micro Man
8. Down Through The Night

Hawkwind have announced that their new studio album will be released later this year.

Titled Road To Utopia, it will launch on September 14 on CD and LP and sees the band hook up with songwriter and conductor Mike Batt to reimagine a selection of Hawkwind classics with an orchestral flourish.

The tracklist includes Quark, Strangeness And Charm, We Took The Wrong Step Years Ago, Psychic Power and The Watcher – the latter featuring a guest appearance from Eric Clapton.

Batt says: “Dave Brock was delightfully free-spirited and generous to me, using a small ensemble of additional musicians and giving me a pretty free hand with the arrangements.”

Brock adds: “Reinventing these familiar songs has been an interesting experience. We hope you like them.”

Hawkwind will head out on the road in the coming weeks and have shows planned through November – including two nights at the London Palladium.

Road To Utopia is available to pre-order on vinyl and CD now.