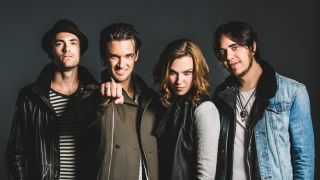 Lzzy Hale and her rock ‘n’ roll cohorts in Halestorm are the latest band announced to play the Metal Hammer Golden Gods, in association with Fireball, at the Eventim Apollo in Hammersmith this June.

The Grammy award-winning Halestorm are joining the previously announced Salute To Lemmy, featuring Saxon and the surviving members of Motörhead.

“We are so excited to be attending and performing at the Golden God Awards!” says frontwoman Lzzy Hale. “This will be no ordinary event. There’s voodoo in the air and the Rock n Roll Gods will smile upon all of us that day! We plan on making them proud and getting real loud! See you all there!”

Tickets for the Metal Hammer Golden Gods award show (in association with Fireball) are on sale now, priced at just £6.66, while fans can place their votes for this year’s awards to be in with a chance to win tickets.

“The Golden Gods are more than just an award show, they’re a party we throw for the people who’ve supported us for all this time,” says Alexander Milas, Editor-in-Chief of Metal Hammer Magazine and TeamRock Executive Director. “We couldn’t be more pleased to add Halestorm to the bill, a phenomenal live band who’ve dwelled in our pages since the beginning and are guaranteed to shake the Eventim Apollo to the rafters. We’ve more big news to come, so if you’re thinking of coming down you’d best get your skates on. No sleep til Metal Hammersmith!”

Halestorm are playing the Sunday of Download festival this year. Tickets are on sale now.

Vote for this year’s Golden Gods winners atwww.metalhammer.com/awards to be in with a chance of winning a pair of tickets to show on June 13 – voting is open NOW.

Tickets are available to buy now for £6.66 at the Eventim website. TeamRock and Eventim will donate all profits from ticket sales to the charity Heavy Metal Truants, an annual charity cycle ride sponsored by TeamRock from London to Download Festival to benefit Nordoff Robbins, Teenage Cancer Trust and Childline.