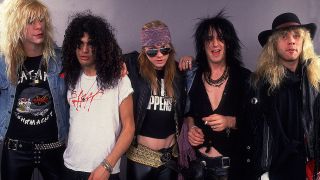 In July last year, Guns N’ Roses hit the headlines after their video for 1992’s November Rain surpassed one billion views on YouTube.

The epic nine-minute shoot – which portrayed frontman Axl Rose marrying his then girlfriend Stephanie Seymour and saw Slash deliver the track’s memorable guitar solo outside a New Mexico church – became the first promo from the decade to surpass the tally.

Now, 15 months later, the 1988 video for Guns N’ Roses’ track Sweet Child O’ Mine has also smashed through the one billion views mark – making it the first video from the 80s to achieve such a feat.

Forbes report that Guns N’ Roses have now racked up an astonishing 895m YouTube views in 2019 alone – an average of 3.1m views a day.

Guns N’ Roses celebrated the news by posting a video on Twitter, which mixes the original video with up-to-date live footage, with the caption: “Guns N’ Roses family made this moment. Sweet Child O’ Mine has hit over one billion views on YouTube.”

The band also updated their Facebook cover pic to mark the news.

Guns N’ Roses are currently continuing their mammoth Not In This Lifetime tour, with their next show taking place in Guadalajara in Mexico on Friday night.