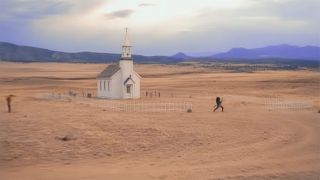 Guns N’ Roses have broken a YouTube record thanks to their video for November Rain.

The promo was released in 1992 and featured on the album Use Your Illusion I which launched the year before.

Now it's broken through the one billion views mark – making it the first video from the 90s to reach such a landmark, according to Forbes.

They report that the epic nine-minute shoot – which portrays frontman Axl Rose marrying his then girlfriend Stephanie Seymour and sees Slash deliver the track’s memorable guitar solo outside a church in New Mexico – averaged almost 560,000 views a day throughout 2017.

Statistics show that 83% of views in 2018 come from countries outside the US, led by Brazil, Mexico and Argentina.

The next two most popular GNR videos on YouTube are Sweet Child O’ Mine which has been watched 694 million times, and Paradise City which has notched up 398 million views.

The band are currently on tour across Europe and will head to the Far East in November.

Guns N’ Roses remaining Not In This Lifetime 2018 tour dates