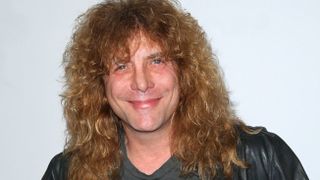 Former Guns N’ Roses drummer Steven Adler says he was due to have a bigger role in the band’s reunion shows – until injury sidelined him.

Adler hooked up with with Slash, Axl Rose and Duff McKagan for two shows with the band last summer but says he had been practicing for further appearances – but it unfortunately didn’t happen.

Speaking about what it was like hitting the stage with his former bandmates for the first time in 26 years, he tells One On One With Mitch Lafon: “It was, ‘Thank you, God, for this beautiful present.’

“I’d been playing Appetite For Destruction tracks live, Use Your Illusion and the songs that I didn’t get to play on Use Your Illusion, I was practicing them. I was playing 25 songs twice a day for two years.

“Because once I found out the reunion was probably gonna happen, I was, like, ‘Yes! I’m gonna be ready and on top of it.’ And then second rehearsal, I hurt my back and I had to have a minor surgery.

“I had a pinched nerve and within an hour, I was out of the hospital and I was all better. I thought they were going to let me come back but it didn’t happen.”

Adler reports his understanding was that he’d play songs from Appetite For Destruction, Lies and “three or four” tracks from Use Your Illusion on the road, while Frank Ferrer would cover other material. And although that didn’t happen – he bears no grudges to his former band.

He adds: “I got some closure and I’m thankful I got to do what I did. I love those guys. It is what it is. What I want it to be is the five of us, and what Axl wants it to be is what he wants it to be and I respect him for it.

Listen to the full interview below.

The book Sweet Child Of Mine: How I Lost My Son To Guns N’ Roses written by Adler’s mother Deanna and author Lawrence J Spagnola was released last month.