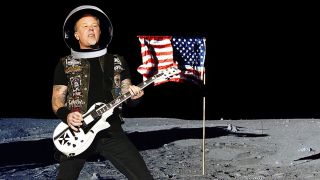 There are new festivals popping up in all sorts of locations, but there are a few that we’re not quite ready for yet. Given enough time and scientific intervention, these will all end up happening at some point…

WHY? If you go down into the Marianas Trench, it’s not only incredibly dark (which is very metal), but the only things that live there are monsters. Proper monsters. Have a Google of Hatchetfish, Fangteeth or the Fanfin Seadevil - they’re terrifying, they’re metal as fuck and they’d all make excellent band names.

HOW? Probably some sort of dome thing, like in the popular early 2000s cartoon Sealab. A kind of ocean-bed Eden Project, or “Seaden Project”.

WHO SHOULD PLAY? Whoever you book, you want to make sure at least one band does a cover of Under Pressure, because there’s eight tons per square inch of the stuff down there, which is a thousand times the atmospheric pressure at sea level.

WHY? Eventually, humankind is going to have to colonise the moon, even if just as a stopgap before heading to Mars. Why not begin this new era of existence as we mean to go on, united in that perfect feeling you get at a festival, leaning on a mate, all pissed on cider?

HOW? There are a few manned missions to the Moon possibly coming up in the next fifteen years or so – it’d take a lot of paperwork and some really convincing speeches, but is there anything in trying to convince the European Space Agency to do a festival there. Just a small one. Couple of stages, nobody too famous, you know.

WHO SHOULD PLAY? It’s kind of a surprise that after staging their own festival and playing Antarctica, Metallica haven’t made a bid for an interstellar gig. But really any festival on the moon seems like it should feature a lot of prog- metal – a Dream Theater gig on the moon would feel somehow right, you know? Alternatively, low gravity lends itself pretty well to the jump, jump, jump, big jump thing that pop-punk bands never tire of, but slower.

WHY? With temperatures of 5,400 degrees celcius, it’s an unimaginably extreme environment (it probably doesn’t count as an environment to be honest, it’s the 800-mile wide solid ball of iron at the core of the planet).

HOW? Like, drills and stuff. “But drills are boring “, you say. No, we reply. Drills do boring. Depending on what websites you regularly read, that’s probably the best joke about drills you’ll see today.

WHO SHOULD PLAY? Metallica - they’re the only band in the world to have played on every continent, so they’d jump at the chance. Plus they’d save a fortune on pyro.

WHY? Dinosaurs, dude. Dinosaurs and caves and volcanoes. Take a photo of anything happening in the world 65 million years ago and it’ll look like an album cover.

HOW? Time travel isn’t definitely impossible, it’s just deeply improbable, but if the original lineup of Guns N’ Roses can reform and turn up to gigs vaguely on time, anything can happen. There’ll probably be some sort of magnets involved.

WHO SHOULD PLAY? Safety is important, and as everyone who’s seen Jurassic Park knows, a T-rex’s visual acuity is based on movement. Therefore it sort of makes sense that you’d want to book bands that mainly play in darkness, like the excellent French sludge band Celeste.

WHY? If long-thought-extinct megafauna still exist anywhere, it’s here, home of the plateaus the ones featured in Up were based on. The animals that are still about are all giant - the giant anteater, the maned wolf, the greater rhea. They’re all pretty flippin’ metal.

HOW? Use the Up method of transporting a full-sized festival up onto a plateau forgotten by time using big-ass balloons.

WHO SHOULD PLAY? Mastodon - not due to the long-thought-extinct prehistoric megafauna name (although that helps) so much as the whole “big, fearsome, outdoorsy men in a forest” vibe. That “I’ll eat what I want of this enormous prehistoric ostrich, and ride the rest home” kind of feeling.

WHY? The nearest neighbours are 1500 miles away. Just think about how freeing that is in terms of really partying hard. There’s nobody to complain about the volume, or the time, or the litter, or the unconventional-looking people showing up. A noise complaint would literally take a week to arrive.

HOW? Tristan da Cunha is the most remote inhabited island in the world, with no airport and five days’ sail from the nearest one in South Africa. So, boats.

WHO SHOULD PLAY? The recent vogue for rock cruises means there are a lot of bands out there with pretty good sea legs. This year’s 70,000 Tons Of Metal festival/cruise featured acts like Cradle Of Filth, Children Of Bodom and Turisas, while next year’s Monsters Of Rock Cruise is headlined by Vince Neil and Queensryche.

WHY? Mercury is our solar system’s largest silicate planet – it’s made of iron. The planet’s made of one metal and shares its name with another. How much more metal could anything get? None more metal.

HOW? Mercury would be one of the more difficult planets to travel to, given its proximity to the Sun, highly elliptical orbit, wildly varying temperatures and mysteriously shadowed poles. However, there’s a satellite project called BepiColombo launching a probe towards Mercury next January, which should arrive by festival season 2023.

WHO SHOULD PLAY? A year on Mercury only lasts 88 days, which means everything’s sped-up, probably, so you’d want the slowest, deepest, droniest music you could find. You’d be travelling so fast that a 29-minute doom epic would sound like You Suffer by Napalm Death. Also, a day on Mercury takes two Mercury years, so even on a one-day festival you’re really going to want to let bands play lengthy, self-indulgent sets.

WHY? Hoth is an ice planet, and cold areas have always been into metal - Finland has ten times the metal bands per capita that Britain has. It’s not a huge stretch of the imagination to assume there’s a fairly sick all-wampa black metal community going on there.

HOW? Oh, come on. Yeah, it’s probably not, like, actually doable. But come on, it’s fun.

WHO SHOULD PLAY? You’d want a who’s who of Scandinavian black metal bands – maybe have it curated by Watain or something. Watain would definitely be up for the thing where you slice a tauntaun open and sleep in it.

Steelhouse: the underdog tale of a monthly rock club that built a festival