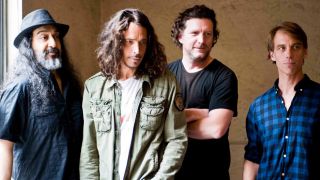 Chris Cornell was never complimented for his lyrics until Johnny Cash covered Soundgarden – and he believes it’s because of the way his vocal can be buried in his band’s music.

That’s one of the reasons he enjoys his solo work as much as working with Kim Thayil, Ben Shepherd and Matt Cameron.

Cornell tells Courant.com: “You can’t always make out the words I sing with Soundgarden. When Johnny Cash covered Rusty Cage it was the first time I received compliments from my lyrics.

“To take this in another direction, when I covered Billy Jean by Michael Jackson, it was going to be a joke. I couldn’t do it in the form it was originally recorded in so I slowed it down. When I did that, it wasn’t funny any more – it’s an amazing story, brilliant lyrics.

Cornell has been interested in stripped-down music since Soundgarden’s early era. “When we were super-loud and aggressive, I didn’t want to listen to that type of music when I was off stage,” he says. “When I got to my stereo I drifted towards more mellow recording artists.

“When I started writing for Temple Of The Dog I went to my room with my acoustic guitar, and I was happy to stay in that mode.”

His interest resulted in 2015 solo album Higher Truth, which he admits was “harder than I thought it would be” to make – but he adds: “It ushered me into a whole new world of songwriting.”

Meanwhile, he reports: “Soundgarden is in the middle of writing songs. After this tour the songs will become real and we’ll put an album out. There’s much more to Soundgarden. I get to play with my band and I get to go solo. It’s great for me.”

He’s currently touring North America, with dates running until the end of July.

Soundgarden: "We never got used to the success"