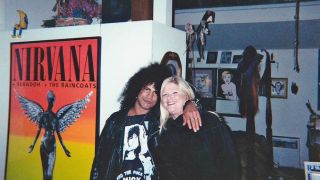 “I have a real affiliation with bad boys,” says Vicky Hamilton. “I like them. I still do. I wish I didn’t.”

It’s probably fair to say that Vicky Hamilton has something of a history with bad boys. After dropping out of college to work in the music industry, she re-located to Los Angeles in 1981, just in time to ride the hair metal wave. She managed Guns N’ Roses, Poison and Faster Pussycat, and helped out with the early careers of Motley Crue and Stryper. Now she’s published her life-story, Appetite For Dysfunction: A Cautionary Tale.

After a book launch in London — at a venue where a mosaic of Richard Branson looks down on the audience, which includes a man dressed as a chicken — Vicky tells Classic Rock what she thinks of the Guns N’ Roses reunion.

“I think it’s great,” she says. “They have all the bells and whistles. It’s a great show. They’re at the top of their game, playing-wise. They look good. They sound good. They just miss Steven and Izzy, but Izzy doesn’t want to be found.

“But it will never be the same as 1986, with the raw energy of those five people. And if you take someone out of that, whether it’s one person or two, it’s never quite the same.”

Back in 1986, Vicky was in charge of those five men, corralling the chaos as they looked for a record deal. Responsible for introducing Slash to Axl (“sometimes a sweet little boy, and sometimes a demon dog”), four of the band ended up sleeping on the floor of her one-bedroom Hollywood apartment.

“Women make such great managers,” says Vicky. “We have that nurturing thing. You have to be the mom, the sister, the aunt, the friend and the therapist.”

So, what does someone playing mother to some of the most unruly men in music have to put up with?

“I had borrowed Howie Hubberman’s [then owner of Hollywood store Guitars R Us, who financed Guns N’ Roses early on to the tune of $25,000] station wagon to take the band to rehearsals as my car had broken down. His kids’ toys were in the back, and I’m going, ‘don’t mess with the kids’ toys’. So Axl’s sitting in the front with me, and Izzy, Slash and Steven are in the back, and I smell something burning, and I see Axl smirking. I look back, and they’d tied Ernie and Bert up in guitar strings, put cigarettes in their mouth and burnt them, and had them flying out the window. I was so mad.”

“I went to see Nikki, and he was sitting out the back of the band’s apartment in red leather thigh-high stiletto boots, rubbing them with petroleum jelly. He’d scorched his eyebrows and eyelashes off, and said he was trying to figure out how to set them on fire without getting burnt. I complained that the place was a mess, mentioning that there were people coming round to see them, and he casually picked a couple of sacks of rubbish and tossed them down onto the neighbour’s patio. “They hate us anyway”, he said. “It can’t get any worse.‘”

“Bobby shit in a cereal box once and sent it to a writer at LA Weekly, but the other thing about Poison is that they were really good at working girls. They would go, ‘Hey! Can I try that bracelet on?’, and then they’d casually walk away, and the girl would say, ‘Give me my bracelet back,’ and they’d respond, ‘Oh? You didn’t give this to me as a gift?’. They had bracelets up to their elbows, and most of them they’d got from girls.”

“We had played a showcase in Arizona, and it was the worst showcase ever. I was trying to save the record deal, so I was up all night with two A&R guys from Elektra and one from Polygram. They ended up signing with Polygram, so I did save the deal, but the next day Taime, who’d been staying at a hotel, demanded that I come and get him. I’d been up all night, so I just said, “Dude. Here’s the address. Find your own way.” He was so mad at me. When he showed up he threatened to throw me through the fireplace. Brent [Muscat, Faster Pussycat guitarist] stood up for me, and Taime threatened to do the same to him. He was mad all the way back to Los Angeles.”

Appetite For Dysfunction: A Cautionary Tale is out now.