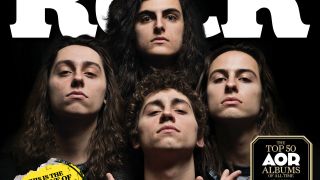 Greta Van Fleet have come from out of nowhere and suddenly they're the most talked-about new guitar band around. Are they poised to take the baton from the old guard of rock greats and carry it into the future? Find out in our exclusive interview in issue 258 of Classic Rock, on sale now...

The New Wave Of Classic Rock
Far from being dead, ‘proper’ rock is having a real resurgence. We look at its recent rise, and at some of the artists poised to bring it on home.

Rival Sons
After years of hard graft and staying true to their retro musical vision, has their time finally come?

Motörhead
They arrived with barely with an audience or a future. Then they released Overkill and boarded a rocket to the moon.

Pink Floyd
We look back at the tortuous creation of one of the band’s most overlooked but important releases: Atom Heart Mother.

The Greatest AOR Albums Ever
Celebrating the very best of AOR from the golden age of the 70s and 80s. We also go beyond the hits and the household names to shine a light on the era’s cult classics and lost heroes.

Marcus King Band
With influences from all points of the musical compass and playing experience way beyond his years, he initially found it “hard to get people to take me seriously”. But now they do.

This month marks the 50th anniversary of not only Led Zeppelin's debut album, but their first American tour. In celebration, this issue also includes a special additional magazine that tells the story of Led Zeppelin I and takes an in-depth look at some of those first US shows.

The Stories Behind The Songs: MC5
Kick Out The Jams was the incendiary call to arms that originally ignited punk’s vital spark in 60s Detroit.

Q&A: Steve Morse
Deep Purple’s current guitarist on Blackmore’s blessing, dealing with the haters and why guitar is the best therapy.

Buyer’s Guide: Kscope Records
Which of the post-progressive label’s releases – including albums by Porcupine Tree, Steven Wilson, Anathema and North Atlantic Oscillation – should you own?

Live Previews
Must-see gigs from Inglorious, Mud Morganfield, Francis Dunnery, The Dandy Warhols and Mastodon. Plus full gig listings – find out who’s playing where and when.

The Soundtrack Of My Life: Myles Kennedy
The frontman with Alter Bridge and Slash’s band on the special records, artists and gigs that will forever be of lasting significance to him.

Classic Rock 258 is available in UK newsagents now, and is also available to purchase online.