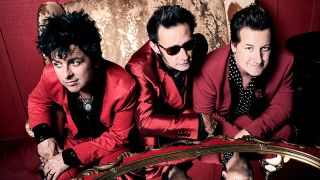 He, along with his dogs, played an acoustic version of Boulevard Of Broken Dreams – but it turned out that Armstrong and his bandmates Mike Dirt and Tré Cool have been busy with other plans, as today they surprise-released a new EP.

The three-track EP is described as showcasing “big guitar in a way these tracks have never been heard before.”

Listen to the EP below.

Otis Big Guitar Mix is the first release since their latest album Father Of All… which arrived back in February.

Green Day: Father Of All...
Green Day released their new album Father Of All.... back in February. The follow-up to 2016's Revolution Radio features the singles Oh Yeah! and Meet Me On The Roof.View Deal