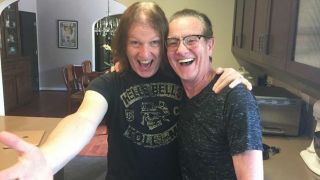 Graham Bonnet is reuniting with his former Alcatrazz bandmate Jimmy Waldo to work on his upcoming album.

The pair, who have not recorded together since their stint in short-lived supergroup Blackthorne in 1994, are also planning a series of select reunion shows next year with Waldo’s current band New England – which features former Alcatrazz bassist Gary Shea. It will be their first time performing together since 1986.

Bonnet said of his decision to record with guitarist Conrado Pesinato, bassist Beth-Ami Heavenstone and drummer Mark Zonder: “It’s been a while since I last released a full-length album – but this band is the perfect group of musicians to do just that.”

The Alcatrazz: The Ultimate Fortress Rock Set box set was issued last month – and an Alcatrazz anthology is also due to be launched later in the year. More release details will be revealed in due course.

Meanwhile, Bonnet is also set to release a concert DVD and an autobiography later this year.