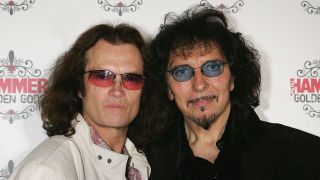 Glenn Hughes says he’d be “honoured” to work on another album with Black Sabbath’s Tony Iommi.

The former Deep Purple man, who briefly fronted Sabbath in the mid-80s, says he remains a close friend of Iommi’s. He last featured on the guitarist’s 2005 solo album Fused.

When asked at a press conference at Hellfest, France, if they could collaborate following Black Sabbath’s The End Tour, Hughes says it could be possible as they “work together really well.”

He adds: “Tony and I speak, or get together, every year, and we sort of look at each other and go, ‘Shall we do another one?’ And it’s kind of like a little joke, but you never know, because we really are close friends and we really do work together really, really well.

Iommi was diagnosed with cancer in 2012, which is one of the reasons Black Sabbath are coming to an end. And Hughes says that the guitar icon’s health takes precedence over everything else.

He adds: “More importantly, what I want for Tony is for his health to be great. Tony is doing fantastic.

“He’s really happy. He has a great family. The most important thing about Tony Iommi is that I just want him to be here on this planet alive.

“I would be honoured to do another record with Tony. But in the real world, we have to wait and see.”

Hughes will start work next month with guitarist Joe Bonamassa, keyboardist Derek Sherinian, drummer Jason Bonham and producer Kevin Shirley on the next Black Country Communion album, which is due to arrive next year.

He’s also in the studio recording a solo album.