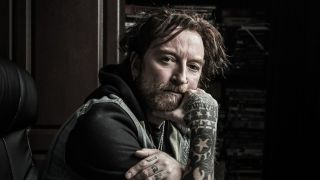 Ginger Wildheart has been hospitalised due to “serious ongoing issues” with his mental health.

His management team have issued a statement saying that Ginger is currently receiving around the clock care and, as a result, his upcoming shows at Manchester’s Dancehouse on August 18 and London’s Union Chapel on August 19 have been postponed.

The statement reads: “It is with regret that due to serious ongoing issues with Ginger Wildheart’s mental health, we will be unable to fulfil any scheduled live appearances in the very near future.

“Ginger is currently hospitalised and receiving around the clock care and is in the safest possible place. We ask that you please respect the privacy of Ginger and his family and friends at this difficult time.

“Thank you for your continued love and support, it is very much appreciated.”

The news comes following reports that Ginger spent the night in police custody following a gig in Ahogill, Ballymena, over the weekend.

Hot Press say that he became involved in an altercation with an audience member at his acoustic show at The Diamond Club – and Ginger later tweeted that he had attempted to take his own life.

Fans have since rallied round Ginger, voicing their support via social media.

Ginger spoke about his battle with depression last year and recorded the track Fuck You Brain with his friend Ryan Hamilton to highlight suicide prevention and raise mental health awareness. Proceeds went directly to The Samaritans.

The postponed shows will be rescheduled but ticket refunds are available from the point of purchase.