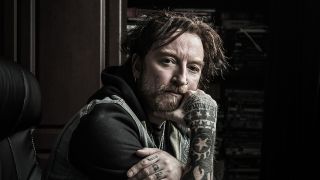 On December 8, 2015, Hey! Hello!, the band formed by Ginger Wildheart, announced that that they would be postponing their UK tour scheduled for later that month.

Rather than gloss over the reasons, Ginger made no attempt to disguise what the problem was: severe depression. To the point where his wife and manager, Jane, sent him to The Priory for treatment.

In an industry where such matters usually come cloaked in euphemism, this level of frankness is as unusual as it is refreshing. Then again, Ginger is the perfect poster-boy-cum-pioneer for this kind of cause. Often troubled, highly talented, never flinching, ask the voluble Geordie a question even about a subject as personal and usually as private as this, and he will answer it.

Why did you decide to reveal the fact that you have battles with mental health?

Well, I still remember the days when people didn’t admit that they were gay. I always thought that was so ridiculous. And when people started coming out of the closet the issue began to be de-stygmatised. It was the first step in educating people about it. Obviously depression is also a big subject, and people don’t know much about it… but it’s really important that people who are in some kind of public position, where people are listening to them, do open up about it so that people better understand what this thing is.

And what is it?

Well it’s certainly not feeling glum. It’s a physical condition as well as a mental condition; your neuro-transmitters aren’t transmitting. But it’s such a loaded subject, and I thought that the best thing I could was to let people know that it’s okay to talk about it. It is a disease, it does kill; in fact it kills more people each year than cancer. Everyone is fine talking about cancer – and so they should be – but cancer has all these charities that fund research, yet mental health gets no research funding from the government. It’s an absolute crime.

Debilitating. It is a lack of everything. But because it doesn’t have any outward effect it’s easy for people to say: “Oh, fucking pull yourself together.” Which is just about the most stupid thing you can say to someone suffering from depression. As Spike Milligan once said, it’s like having a broken leg and someone coming up and saying: “Oh, just walk on it.” Depression is an overwhelming sense of hopelessness. But the good news is it’s fixable.

When did you first become aware of your own mental health issues?

I think I’ve always been aware of it. It’s just that I used to self-medicate. I started off with Jack Daniel’s and speed, and then I went all the way up to crack and heroin. I just used to put off the reality, and then blame the come-down and the way I was feeling on the drugs. The come-down from cocaine is pretty brutal, so I’d just put the way I was feeling down to that. Other times I would blame it on the stress of working too hard.

Stress, too, is a major component of depression, especially in males: working too hard, juggling too many balls. And I’ve always juggled too many balls, thinking I was superman. And then there’d be a massive crash. All of my life I’ve been blaming this stuff on drugs and I’ve been blaming it on relationships. And it just never went away. And that’s what happens – when you’ve got everything you wanted, and you’re exactly what you want to be, and you look around and your life is pretty much perfect, and pretty much just how you designed it, that’s when it gets you.

Much of the behaviour for which you and The Wildhearts have been celebrated may actually have been symptoms of mental health problems. Do we need to reassess our definition of what is ‘cool’ and what is not cool?

This is a tricky and fascinating subject for me. I think that rock’n’roll really does provide a safe haven for people who would otherwise be locked up, be in jail or be a danger to themselves and other people. And we kind of celebrate that in rock’n’roll. I think in a lot of ways rock’n’roll is a house for crazy people; from Ozzy Osbourne to Angus Young – what would a guy who dresses up as a young boy do in the real world? We celebrate them. Working with as many crazy people as I have, you often find that things like depression affects certain types of people. And a lot of these people find their home in the music industry.

To what do you attribute that?

That’s a good question. I could seriously talk you a book on this subject. For example, when it comes to the music industry, how many industries are there where people die as young as they do in music? If you can’t attach a mental health problem to the death of Kurt Cobain and the death of Jim Morrison and the death of Janis Joplin… I mean, it’s not natural to die at twenty-seven years of age. But we just go: “Ah, but it’s so cool; it’s fine.” But it’s not fine. It’s a double-edged sword. But I think rock’n’roll is a good place to house people who have mental health problems, because it suits our personality.

If you were more – quote, unquote – ‘normal’, might you be less creative? And if so is that a price worth paying?

I’m sure there are plenty of well-rounded people who are very creative. And since I’ve been on my new medication I’ve been writing a new acoustic album, and I’ve learned that I’m a lot more philosophical about things. In the past I’d tend to be passive-aggressive in songs, that was a big favourite of mine. Now, I realise that having a good tune and writing about, say, someone I’d fallen out with, is just lazy. Now I’m thinking about the future, and about our relationships with each other, and what we can do to help, even if it’s just helping one person. So I find that my creativity hasn’t been touched at all. If anything it’s more exciting, because I’m writing about subjects that I’d normally avoid like the plague.

Do you expect severe depression to come calling at your door again? And does the prospect of that frighten you?

Anyone who suffers from depression always expects it to come back. It’s the nature of the beast. But I will say that [of late] I’ve missed just one day of medication. The reason was because I went to California to attend Lemmy’s funeral, and I didn’t get back in time to get my prescription for medication. So I missed a day out of my usual medication cycle, and straight away I felt the sense of hopelessness that I used to feel every single day.

But this medication that I’m on, while amazing, may not be amazing for ever; and one day I’m going to have to come off of it. But I’ve been dealing with depression for so long that I do have a good feeling that it’s not going to take me out. And it does take an awful lot of people out. You just have to look at the names, whether it be [former Wales football manager] Gary Speed, or [actor/comedian] Robin Williams, or whatever suicide that comes to your mind. There’s nothing really natural about suicide at all, yet people are somehow okay with it. But people who are depressed are battling depression. They don’t just have depression. Every day they go to war with themselves. And that’s a fucking hell of a fight.

And have you reconciled yourself to this fight?

I think I have. But I do know that people in their fifties and sixties who have this condition, that’s the age that they tend to kill themselves. They’ve been fighting it for so long that they just go: “I’m tired, I’m sick of this.” But it’s also the people you leave behind, the people who’ll miss you. I’ve got three kids. If I killed myself, at least one of those kids is going to copy me. They’re going to go, “Oh, you don’t have to cope – my dad didn’t.”

What, to you, are the most jarring misconceptions about depression and mental health problems?

There’s just so many. I lost all respect for Gene Simmons and Henry Rollins when they responded to the news of Robin Williams dying with the attitude that he should have pulled himself together and that he shouldn’t have been a coward. The phrase “Go jump off a roof” was used. And I was, like: you know a lot of people are listening to what you’re saying, right? Are you sure that no one has actually followed your instructions and jumped off a roof? You’re really really popular, and you’ve got to be a bit more accountable than that, mate. I would just hope that if people are a bit more open about depression, then people with public profiles might be a little bit more accountable when it comes to their own opinions on the subject. Especially when it’s something they know absolutely nothing about.

You don’t appear to be a depressive personality, which is often the case with performers who suffer from with this. Why might that be?

I think that’s because rock’n’roll and the performing arts is full of creative people, but in these areas some of these people have depression. So you’ll find that a lot of people with this condition, in this field, are actually exhibitionists, as opposed to being glum people sitting in a corner with a dark cloud above their heads, which is the common image. That’s a bit of a Victorian view
of what this illness is.

Apart from medication, how else can you combat what ails you?

Getting back to work. Anyone who’s battling depression knows that you’ve got to get back to work. I think the time off has given me mental clearance to organise the new dates [Hey! Hello!’s rearranged tour, set for April] with plenty of preparation, something that’s been missing in my life for a while. And that’s great for me. I can’t wait to come back. And not just come back, but to come back better and stronger.

Visit www.mind.org.uk for information and advice.