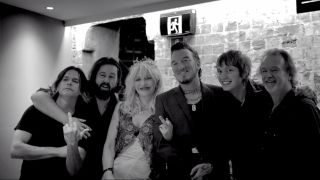 Ginger Wildheart has released a video for Honour, a duet with Courtney Love. The single was first released through Ginger’s membership scheme GASS in August, and was A-listed by TeamRock Radio earlier this week. Ginger has spent much of 2014 as a touring member of Love’s band.

“She’s great to work with, very funny, generous and spontaneous,” Ginger told Last Year’s Girl last month. “She was also kind enough to let me film the video at her recent sold out Sydney show. Wait until you hear it, she sounds like Celebrity Skin era Courtney. She nails it so good. As a fan you’re going to love it.”

GASS (Ginger Associated Secret Society) was launched earlier in the year, while GASS Lite, a free version of the service — offering unique tracks, videos, diary entries and other content — was announced yesterday.

Ginger plays his ‘Oh Fuck I’m 50’ birthday bash at The Forum in London on December 17. Tickets are on sale now.