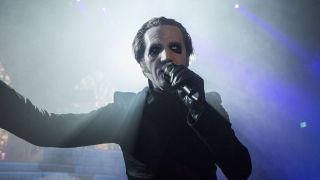 Ghost fans have raised more than $6700 for the family of Jeffrey Fortune, who passed away at a show by the band.

Fortune, 52, collapsed during the intermission at the Swedish band’s gig in Milwaukee. Despite emergency medical treatment, he was later pronounced dead at hospital. The cause of death was revealed to have been a probable cardiac arrest. The band cancelled the remainder of their show.

In the wake of Fortune’s death, Ghost fanclub Ghost American Ministries launched a GoFundMe page to raise money for his family. The total currently stands at $6700 – almost seven times the initial target of $1000.

A message on the GoFundMe page read: “We at Ghost American Ministries wanted to come together to help out the family of Jeffery Allan Fortune during their unfortunate time of loss. On May 31st, during the Ghost concert, Jeff collapsed and later passed on. He was our brother in Ghost. He was a great guy and a huge music fan.

“He was an amazing person, artist, poet, musician as well as a tortured soul- yet he was kind with a bright shining soul. He saw beauty in the darkest of places and often visited/dwelt in those places at times. He alternately referred to himself as “Hell on two legs, walking” and also “a child of God”. Please let everyone know how touched and grateful our family is to each and every one of you for helping us through this time.”

Ghost, who have just released their fourth album, Prequelle, also issued a statement of their own.