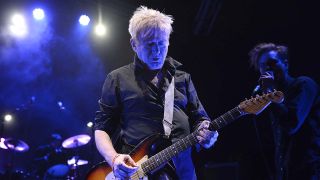 The surviving members of Gang Of Four have joined with Andy Gill’s widow Catherine Mayer to pay tribute to the guitarist with a new song titled Forever Starts Now.

Gill died in early February at the age of 64, with Mayer later suggesting that the  influential musician could have been an early victim of COVID-19.

Now Mayer, along with Gang Of Four vocalist John Sterry, bassist Thomas McNeice and drummer Tobias Humble, have released the new track, which was written by Gill and Sterry and originally titled Hero.

Sterry explains that the lyrics are about “a character who sees himself as the hero of his own life and manipulates his partner into supporting this fantasy. The line, 'She sings along with his song / she thinks it's like having the radio on...' always brings a wry smile.”

Forever Starts Now is the first track taken from the upcoming Gang Of Four EP Anti Hero which will be released on July 17, with all proceeds from sales going to the Guy’s and St Thomas NHS Foundation Trust  – the London hospital that tried to save Gill’s life earlier this year.

Author and activist Mayer says: “Andy always had a healthy scepticism about celebrity culture and populist politicians – and he could always spot when someone was blowing smoke.”

“Even so, he would be moved and delighted that artists he loved and admired have come together to celebrate him by launching this EP and for such a good cause.”

The EP artwork, which can be seen below, was created by Shepard Fairley, who was also behind the famous Barack Obama ‘Hope’ image.

Fairley says: “Gang Of Four has been a profound inspiration for me because the band demonstrates that great art can powerfully merge pleasure and intellectual provocation.

“I was devastated to hear of Andy Gill’s passing, but honoured to make a portrait of him in the hope of creating an iconic image of one of my heroes – with apologies to Andy, to me he was a hero – to serve as a reminder that though life may be fleeting, Andy’s potent art and ideas will endure.”

The second single from the EP, Day Turns To Night, will be released on June 26.

Gang Of Four: Anti Hero
This four-track EP will be released this summer as a tribute to late guitarist Andy Gill. It features the single Forever Starts Now and all proceeds from sales will go to the Guy's and St Thomas NHS Trust.View Deal