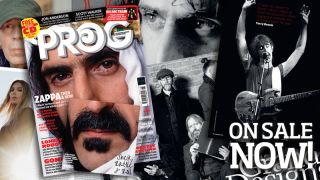 The new issue of Prog is on sale today. The legendary Frank Zappa graces the front cover. It's 40 years since he released both Sheik Yerbouti and Joe's Garage, two of his seminal works. We talk to Adrian Belew and Terry Bozzio who worked with Frank on those records to get a fascinating insight into Zappa's work. Plus, with the Bizarre World Of Frank Zappa hologram tour arriving in the UK this month, we talk to Dweezil and Ahmet Zappa about the new tour and just what we can expect.

Lonely Robot - John Mitchell reaches the conclusion of his space trilogy with Under Stars.

Banco del Mutuo Soccorso - the Italian prog legends release their first new studio album for a quarter of a century.

Mostly Autumn - the British prog rockers create a wonderful new album from the memory of a former bandmate.

Gong - Back with their second post-Daevid Allen album, The Universe Also Collapses.

Louise Lemon - the Swedish singer explains the ideas behind her death gospel sound.

Giancarlo Erra - The Nosound man opts for a minimalist classical sound on his debut solo effort.

Joey Frevola - the Kyros guitarist opens up about his prog world.

And music from Panzerpappa, GRICE, Sermon, Lazrtuth and more on the free CD.