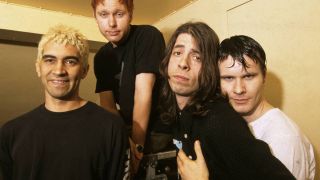 Foo Fighters are now in their third decade as one of the world’s best and most popular live bands, regularly performing to thousands of fans at festivals and in stadiums and arenas worldwide. It’s a far cry from the group’s humble live beginnings with a pair of unannounced secret shows in their home region of the Pacific Northwest 20 years ago.

Though they’d played low-key sets at a private party in Seattle and an impromptu support slot in Arcata, California, in February, the Foo Fighters shows at Portland’s Satyricon on March 3,1995 and at Seattle’s Velvet Elvis the following evening represented the first real opportunities the public at large had to catch Dave Grohl’s much-talked-about-but-seldom-seen band in action.

Excitement had been building ever since news had broken about the former Nirvana drummer’s solo recording sessions in October of 1994, about six months after the suicide of friend and bandmate Kurt Cobain. Tapes of the songs, in which Grohl played pretty much everything, were very well-received, initially by friends and music business insiders who were given copies and later by the wider public when two tracks – a cover of the Angry Samoans’ Gas Chamber and the Grohl-penned This Is A Call – were played by Eddie Vedder during his Self-Pollution radio broadcast in January, 1995.

Grohl’s subsequent announcement that the Foo Fighters would include former Nirvana colleague Pat Smear on guitar alongside Sunny Day Real Estate’s rhythm section, bassist Nate Mendel and drummer William Goldsmith, had prompted increased excitement as well as speculation as to when the band would make its local live debut.

The Satyricon show in Portland – a benefit to raise money for the investigation into the rape and murder of Gits lead singer Mia Zapata in 1993 – was a sell-out.

The Velvet Elvis setlist (as featured in ‘Taking Punk To The Masses’ by Jacob McMurray) and Foo Fighters’ self-titled debut, released in July 1995.

Despite the Seattle show being unannounced, rumours of the Velvet Elvis performance had become the talk of the town, spreading by word of mouth in the hours before the gig, resulting in a long line of fans waiting in the cool late-winter air in the garbage-strewn alley outside the intimate theatre in Seattle’s Pioneer Square district.

For those lucky enough to gain entry (500 or so people were rumoured to have been left outside), it was considerably warmer. As showtime approached not only were all the seats in the tiny theatre occupied, but so too were the aisles and pretty much every available bit of floor and wall space. There were even people surrounding the band on all sides of the low stage.

Though slightly claustrophobic, it was a cozy, friendly atmosphere - no one was there to watch Grohl fail, after all. That said, collective hopes and expectations were very, very high indeed. And there was a definite ‘here we are now, entertain us’ type vibe in the air.

So it wasn’t that surprising, perhaps, when Grohl looked a little nervous as he wandered out, guitar pick between his teeth, and gave a little wave before pulling on his guitar and gently strumming the opening chords to Butterflies. It was quite quiet – the gentle chords and plaintive vocals were at times almost drowned out by the excited chatter of the crowd – until the rest of the band joined thundered in, and the Foo Fighters had everyone present’s attention.

As they worked through a 10-song set that featured the bulk of their debut album they just got better and better through early favourites Winnebago, I’ll Stick Around and Alone + Easy Target before culminating with an epic Exhausted. Grohl’s confidence as a frontman and his voice, in particular, grew as the set went on and Goldsmith and Mendel, despite sharing a couple of nervous glances early on, played their parts – or, more accurately, Dave’s parts – to perfection. And Pat Smear? Well, he just grinned like a bastard the whole night.

The enthusiasm was shared by the audience which gave each song an excitable and raucous reception. Afterwards some excitedly discussed in breathless tones how the band had been better – and the songs much stronger – than they’d expected. Many were just generally quite pleased for Dave Grohl because, you know, he had been through quite a bit over the past year.

It didn’t take a genius to predict big things for the Foo Fighters at their live inception although few probably would have predicted quite how monstrously huge they would become. It was the kind of show you knew you would be talking about and boasting about being at for years. Twenty and counting, to be precise…