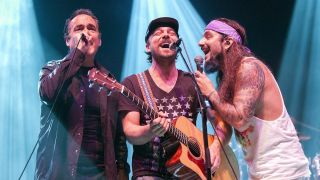 Flying Colors have released a video of a live version of Mask Machine. It’s taken from Second Flight: Live At The Z7, which was recorded in Pratteln, Switzerland, on the band’s 2014 tour. The album is the follow-up to last year’s Second Nature.

“It was especially exciting because we had just performed many of these songs for the first time, days before,“ says guitarist Steve Morse.

“We had a blast playing these tunes and can’t wait for you to hear them… you can feel the excitement!,” adds singer Casey McPherson. “I’m still trying to learn Steve’s guitar parts, though.”

Flying Colors drummer Mike Portnoy will start a world tour with the Winery Dogs in October, while Steve Morse joins Deep Purple for their European tour in November.