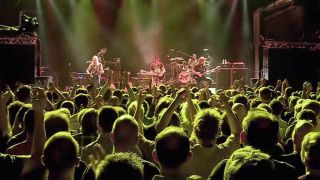 Flying Colors have revealed details of an upcoming live release.

Filmed in Switzerland on their 2014 tour, the release is the follow-up to their previous concert film Live In Europe.

The show was filmed just a week after the release of Flying Colors’ second album Second Nature. Guitarist Steve Morse says: “It was especially exciting because we had just performed many of these songs for the first time, days before.”

It can be heard in 5.1-surround recorded in two separate locations – behind the front-of-house soundboard, or in the front row. An audio-only version of the concert is available in Headphone Surround. The headphone mix will be available in formats designed especially for HD devices such as Pono.

Singer Casey McPherson adds: “We had a blast playing these tunes and can’t wait for you to hear them. You can feel the excitement.”

A trailer for the film can be viewed below.

1: Open Up Your Eyes

6: A Place In Your World

7: Forever In A Daze