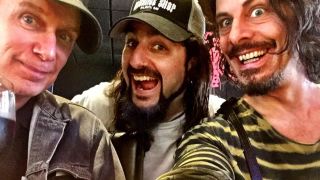 Mike Portnoy says The Winery Dogs have nearly completed the follow-up to their 2013 self-titled debut.

The trio of Portnoy, bassist Billy Sheehan and guitarist/vocalist Richie Kotzen entered the studio in January with a plan to have the album ready for summer, but now the drummer reveals the project is on track for an autumn release.

Portony tells Metal Wani: “We’re almost done with the new album. Richie’s finishing up his tracks at the moment. And mixing begins in July, so we’ll deliver the record to the label very soon. The tour is already scheduled to begin at the beginning of October in America.

“So the plan is to have the album out in time for the tour starting in October. And then once it comes out, we’ll begin the tour cycle, which will likely go well through 2016, and we wanna just play as many places as we can.”

Last year, Kotzen said he was surprised by the band’s success out of the gate and he continued his solo career with the release of Cannibals earlier this year.

Kotzen will appear on Def Leppard’s 2016 cruise, Hysteria On The High Seas, in January.

The guitarist will perform alongside a host of other acts including Vivian Campbell’s Last In Line, Tom Keifer, Eric Martin and Kip Winger, with more to be announced.