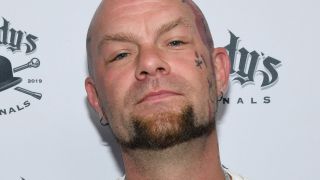 The group began recording sessions for the follow-up to 2018’s And Justice For None in May this year, with guitarist Zoltan Bathory hinting last month that the record was “shifting back to that heavier side.”

Moody, who was a recent guest on HardDrive Radio, was asked about the direction of the record, to which he replies: “We're of the understanding that we have our core fan base, and we're definitely going to keep it old school – the way we've always done.

“We love metal – those are our grass roots. But at the end of the day, as artists, we really have to experiment. I'm a lover of music, so be it not me to just stamp the black and white thing and not take the chance to really do something creative. And I'm happy at the fact that my guys are in the same headspace.”

And, asked if they had a timeline for a new track release or for the record itself, Moody responds: “It's absolutely open-ended. I don't want any endgame on it. There's no end line to it.

“I really want this to be ready when it's ready. I'd love to have it out by the beginning of 2020. That's my goal, personally, for multiple reasons. But I think the more time that we take on this and the more heart that we put into it instead of just trying to be on some deadline…"

He adds: “I’m really sick and tired of safe music. There’s this structured way that everybody has to write their music and it’s so fucking monotonous to me.”

Five Finger Death Punch have temporarily put their time in the studio on hold due to their current North American tour, which will wrap up with a set at the Impact Music Festival this coming Saturday (July 27).

The as-yet-untitled album will be the first to feature drummer Charlie Engen, who took over from Jeremy Spencer in December last year.

Spencer was forced to quit after having a second operation on his back and recently joined the Indiana Police Force.