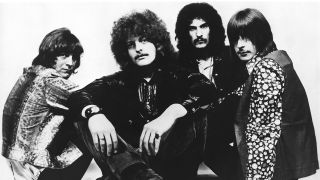 The first two Blodwyn Pig albums are to be reissued on a deluxe edition CD this summer.

Ahead Rings Out and Getting To This will be packaged together along with bonus material on July 27 via Chrysalis Records.

The CD will feature new sleeve notes within an eight-panel poster along with two previously unreleased songs, McGregor Muckabout and One Thing Leads To Another together with bonus material to the original studio albums.

In addition, Ahead Rings Out will also be released on heavyweight 180g vinyl, with the tracks mastered from the original master tapes.

Blodwyn Pig were formed in 1968 by Jethro Tull’s Mick Abrahams, with Ahead Rings Out being released that same year, while Getting To This arrived in 1970.