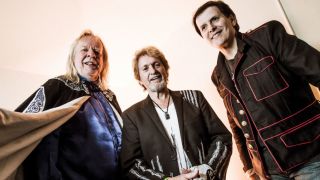 The first new music from Yes featuring Anderson Rabin Wakeman has been aired and has subsequently appeared on the Internet.

As reported on Henry Potts' well-placed Yes resource Where Are They Now, Rabin explained the song was originally used over the end credits of TV show Agent X back in 2015, but that Anderson and Wakeman had heard it and liked it "So we thought 'Yeah, let's do it', so we did it."

The piece, which features Rabin and Anderson on lead vocals, clocks in at 5:22 and has been produced by Rabin. This is some confusion as to whether the mix is finished or still a work in progress. In April of this year it was announced that "...the band are currently hard at work, creating some stellar new recordings for their 50th Anniversary. This will be the first new music in 28 years featuring Jon Anderson/Trevor Rabin/Rick Wakeman together. It is planned these will also be available for release by the end of 2018 or early 2019."

You can watch the whole of the Trevor Rabin interview here.

You can listen to the whole of Fragile here.