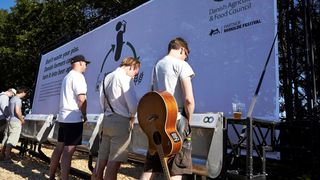 Danish brewery Norrebro Bryghus have produced a beer with the help of 54,000 litres of urine collected at the 2015 Roskilde music festival.

The new product is called Pisner – but contains no human waste. Instead, the urine was used to fertilise the barley for the beer, rather than use more traditional methods – and it’s called Beercycling.

CEO at the Danish Agriculture and Food Council Karen Hækkerup tells Visit Copenhagen: “Just as we have seen shops sell goods that would otherwise have been thrown out, Beercycling allows us to recycle a product that is normally flushed down the drain.

“When it comes to circular economy, Danish farmers are some of the best in the world. If you can brew a beer with urine as fertiliser, you can recycle almost anything.”

Norrebro Bryghus chief executive Henrik Vang adds: “We want to be a part of the Beercycling project partly due to the story it has already told, but also because it is interesting to partake in a project, which addresses the challenges of sustainability and circular economy. Basically, it is a cool project.”

The urine collected resulted in enough barley to produce 60,000 bottles of beer and the pisner will be available to buy next month.