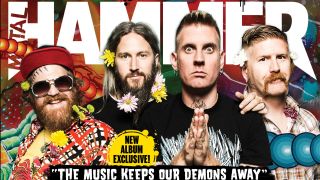 We exclusively reveal the new Mastodon album art in a giant and gorgeous gatefold cover and head to Atlanta for an audience with the band themselves for their biggest, most eye-opening interview yet! Plus there’s a free CD, free posters and killer features with Korn, Down, Slash, Bury Tomorrow, Northlane, Devil You Know, Sabaton and many more!

Unhinged. Unstuck. Unleashed in Atlanta! We head out to the Dirty South with the one and only Mastodon to get the skinny on their mind-boggling new album, Once More ‘Round The Sun, the dark times that oversaw its creation and an exclusive look around the haunts that made the band. Plus, we’re stoked to be exclusively revealed the cover art for the album - all on a one-of-a-kind, fold-out gatefold cover! Check it out. It’s huge and fucking amazing!

Also in our new issue we’ve got free GWAR and Upon A Burning Body posters, as well as a free Beard Science CD, featuring 15 beasty cuts guaranteed to put some hairs on your chin.

Also, we chat to Nine Inch Nails mastermind Trent Reznor about the UK tour, let Korn legend Jonathan Davis let off some political steam, jump in the studio with Slash, check out Foo Fighters sticksman Taylor Hawkins’ new band and, in a year where Down, Eyehategod and Crowbar are all releasing smashing new opuses, take a trip down memory lane to revisit the incredible scenes that took place during the New Orleans 90s metal boom. You won’t believe some of the snaps and stories we’ve got hold of…

Plus, we delve into the dark and unwavering mind of Triptykon mainman Tom G Warrior, head out on tour with Monster Truck for this year’s epic Lords Of The Riff, play Battle Move Top Trumps with Sabaton and dig into the amazing mythology behind the ace new Bury Tomorrow album!

We also catch up with ex-Killswitch Engage man Howard Jones and find out why he left the biggest metalcore band in the world (and why he’s returned with Devil You Know), discover why Black Stone Cherry’s Chris loves a bit of Justin Timberlake and discover what all the Thunder From Down Under is regardless fast-rising tech-metalcore crew Northlane.

All this plus Red Fang, Dream Theater, Mayhem, Five Finger Death Punch, DevilDriver, Clutch, Killer Be Killed and much more! Out this week! Go and get it immediately!