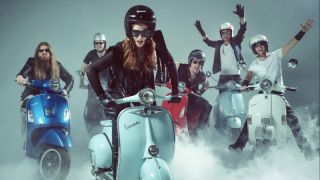 Dutch symphonic metallers Epica are coming back to the UK and Ireland for a special tour in April 2018 – presented by Metal Hammer!

Visiting in spring, after the release of their new EP The Solace System due later this year, the band are also playing their first-ever show in Ireland at Dublin’s Tivoli.

Following the band’s sold-out show at the O2 Shepherd’s Bush Empire in April, this is the band’s first full tour of the United Kingdom since 2015.

“We’re coming back to the UK, and not for just 1 show like last time,” said guitarist Mark Jansen. Also Ireland for the very first time! We’re looking very much forward to partying with you guys – see you in April!”

Supports are yet to be announced, but just wait until you see them!

Tickets go on general sale August 4, but Metal Hammer readers will be able to get their tickets a day early here and here for the Dublin date. These will sell out, so get on it quick!

Epica feature on the Hammer Goes 90s CD in the new issue of Metal Hammer, where they have covered Fear Factory’s Replica. Order your copy now.

Epica release their new EP, The Solace System, on September 1 via Nuclear Blast, and is available to pre-order now from Amazon UK and Amazon US. Epica’s North American tour with Lacuna Coil and Insomnium starts on August 31 – get your tickets now.