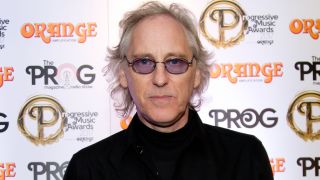 The multi-musician began his career as a teenager in the 70s and has played with a number of bands including Curved Air, Roxy Music, UK, Jethro Tull, Frank Zappa and Yes, and he received the Lifetime Achievement Award at this year’s Progressive Music Awards.

Jobson announced his retirement from touring via his website. A section of the statement is below, and you can read it in full here.

Firstly, sincere thanks to the Progressive Music Awards and Prog magazine for recently honoring me with their Lifetime Achievement Award, and to Sonja Kristina for graciously presenting it to me. After almost 40 years of sustaining a music career almost exclusively in the U.S., I am always wonderfully surprised to receive any level of recognition in my home country. Nice, thank you.

Secondly, I would like to thank all of the Z-Funders for your extraordinary patience in waiting for me to fulfill all of my obligations, especially as regards delivery of the piano improvisations, the music book and the Japanese studio visit.

As you may have observed, I have been seriously “off the grid” for the last six months; you may have also noticed that the Fallen Angels tour never did extend to the U.S. West Coast or Japan. The reasons for this are too copious to enumerate here, but they do include being injured in a fall; then being involved in a high-speed car crash on a Los Angeles freeway (I have been in therapy for my back for the past four months); and, in the past year alone, dealing with the deaths of nine (yes, nine) close friends, colleagues and family members. Frankly, it has been a rough year.